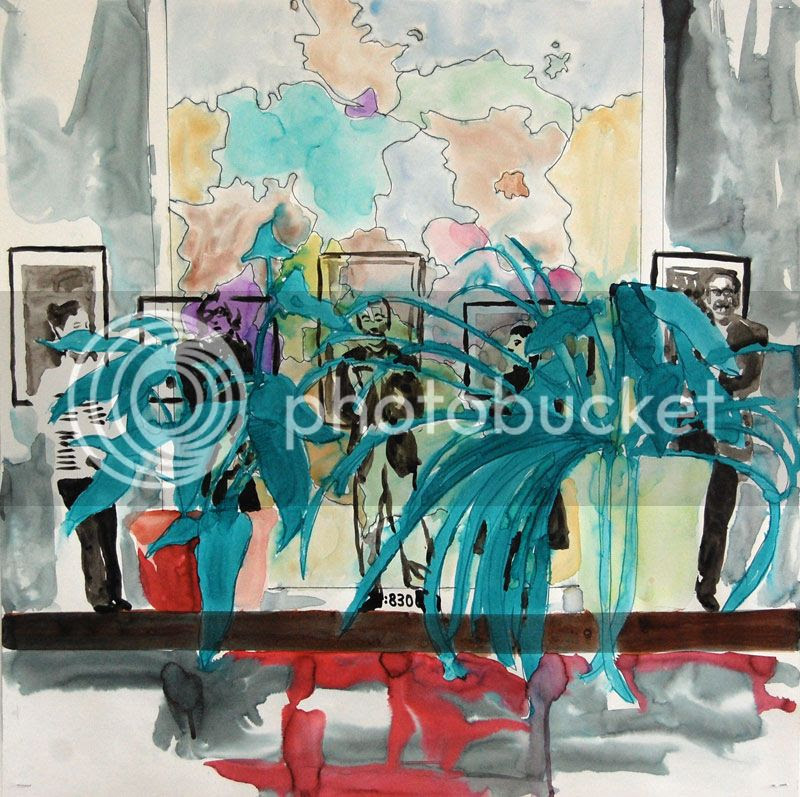 Culture, like democracy, is a fragile thing. Like a plant you have to provide it with a place to grow, nourishment and care. But like a plant, culture is often ignored or taken for granted. We forget about it, it’s just there. Like a painting on the wall.

On my trip to Croatia this summer I saw a photo of a cultural event in Rijeka from 1978, people lined up in the street, smiling for the camera. I love old photos of artist groups from various places, all these little regional groups working in parallel, all around the globe. There’s something romantic about it, the urge to create in some little corner of the world. And then I thought about the revolutionary impulse, people taking to the street, how it shares a certain bravery and recklessness with the impulse to make art, to communicate. What has happened to the revolutionary impulse? Did somebody forget to water it?

Last year I was painting about astronauts and indians on the moon. Those paintings were about technology as a dead end, about the empty future, about the end of the world. I needed to get away from that place. Rather than projecting into the future, I turned to the past, which I find is vanishing just as quickly. If you look at old photographs they show worlds gone by. It’s like magic, but also filled with sadness. We can’t get the lost time back. I draw diagrams over the actors from the past, looking for clues in the surface of time. Is there a pattern, some underlying structure that lies hidden in the most mundane corners of existence? Back behind the plants on the shelf or on the window sill where the revolution lies forgotten?

The Vit Soukup retrospective had a big impact on me. His use of photographs as source material, his approach to the banal, his interest in Czech popular culture and the period of normalization. Normalization seems to live on – just as many people have internalised totalitarianism, only understanding power and betrayal in their interpersonal relationships, the cultural stasis in the 80s seems to still be inside us too, we’re stuck in it like a kind of quicksand. Time vanishes, but in other ways it seems to keep returning. We’re trapped in the Eternal Return, like hamsters on a wheel.

The immigrant is the person who stands at a crossroads where different cultures meet; the immigrant becomes a cultural hybrid whose experience falls somewhat to the side of the national cultural dialogue. Immigrants never fully belong to their new home, nor to the one they left. We are like uprooted plants, trying to send a tap root down to find new water. The wind blows us around like dust.