The wide-ranging retrospective of the work of Czech painter Vit Soukup, which closed in mid-March 2013 at Divus in Prague, was a unique glimpse into the mind of this talented artist. The show reflected the melancholic weight of history that pervades life in Prague, and also the bittersweet irony and dark humour that flourished like mushrooms in the dark soil beneath the offical facade of the former regime, and which continues to be relevant today. Soukup's work stands as a beautiful warped reflection of his time and place, finding inspiration in the detritus of childhood and cheap media filtered through a love of Old Master painting (especially El Greco) and presented in the sophisticated idiom of postmodern Pop Surrealism, although Soukup's work transcends labels. The exhibition ranged from his early teenage works to his last works before his suicide at the age of 36 in 2007. 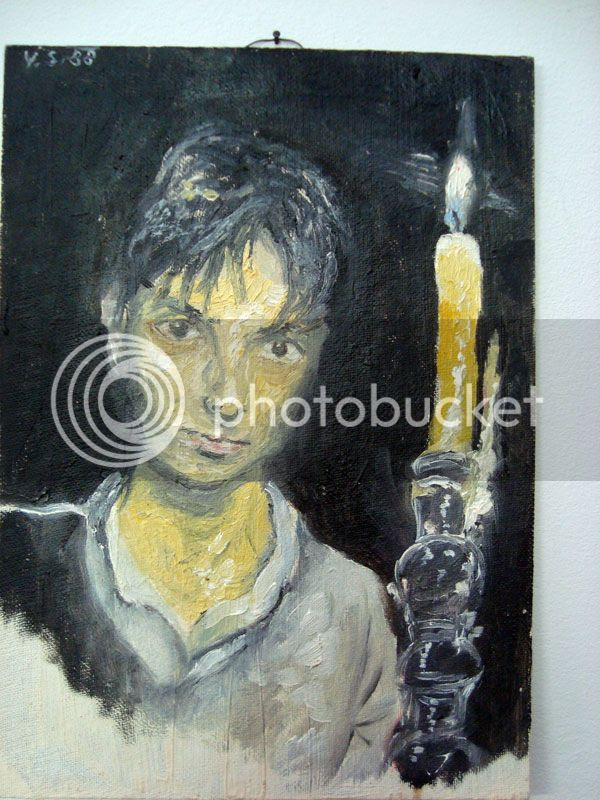 Seeing these youthful self-portraits is reminiscent of art monographs on painters from the early 20th century, and its refreshing the way that Soukup, though he worked in video and performance art as well, was a committed figurative painter in a scene that often values a conceptual, overly-intellectualized approach. Soukup worked in series, the early paintings from the 90s reflected on life in exotic locales (Life in the South) or adventures in the forests of Canada (Adventure Holidays). The novels of Jack London, for example, are still popular for young Czech readers, and this fantasy of a free natural world peopled by independent rugged characters holds a strong sway over the imagination here, as a symbol of living free beyond the bounds of the state, or to escape this small country and roam the world. 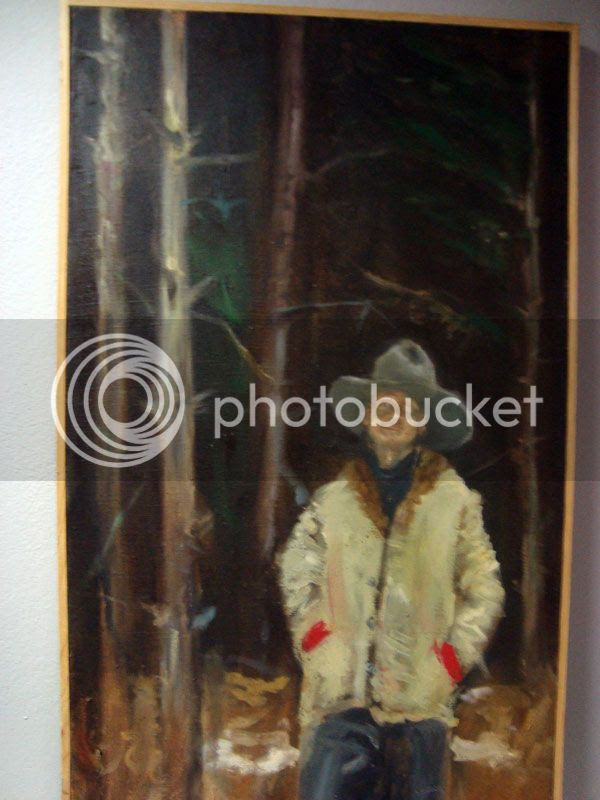 And yet for all their yearning to be free, Soukup's figures are conflicted and trapped by power struggles or existential dread, yet presented knowingly, in a tongue-in-cheek way, as we laugh together wuth the artist through the tears. The figures are distorted as in El Greco in a kind of Mannerist/Expressionist shorthand, but there remains something tactile about the material of the flesh and objects, a nod to the old Dutch masters, which gives the work the feeling of a feverish dream. The flesh is like modelling clay, or the figures seem carved from wood; poor humans with their fragile concerns lost in the world. 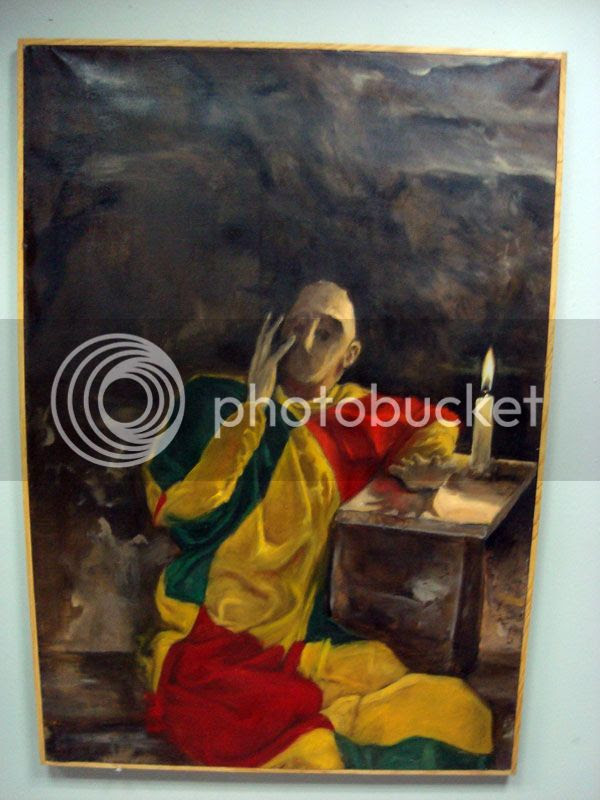 Soukup moved on from these works to examine the kitschy everyday objects that surround us and come to define us. Our material possessions presented as still-lifes: extension cords, lace pillow, candles, sweaters .. all this detritus from the interiors of Czech panelak apartments and country weekend homes. The sense of ironic distance remains, and yet the love for these simple things can be felt as well. There is a beautiful humility in Soukup's work which elevates the crap one can find abandoned in a cheap bazaar to the level of the ideal, as if to say that even the lowest cast-off is valuable, that it deserves our respect. Another series, UFOs, took this logic to an extreme and presented small paintings of minor fragments of old plastic toys, door knobs, broken buttons or other "garbage", yet mysteriously transformed into something alien, something compelling. Soukup's power in these works stems from the way he invests the physical world with a spiritual presence, the way he invests the world with meaning. 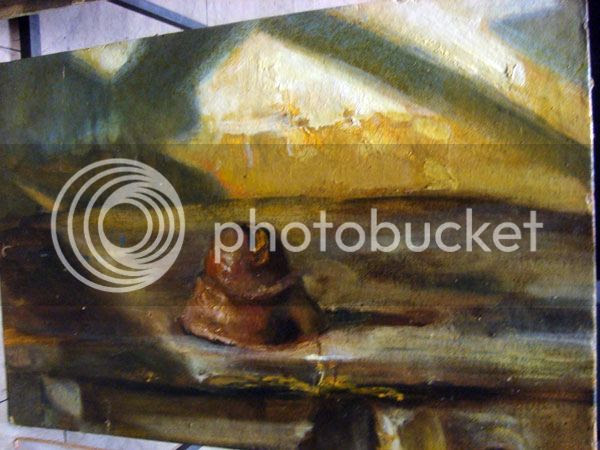 Working with old photographs from cheap magazines from the 1970s, Soukup focused on the common-place but absurd shots in fashion magazines of models modelling sweaters. In his series Dorks, he instills the same sense found in the UFOs series, that the value of each lowly man shpuld be considered, should be elevated. The works stem from an equating, sympathetic gaze which compells the viewer to understand that we are all dorks, we are all in this (shit) together. We laugh at these goofy fools, and we see ourselves in them too. As paintings of photographs, the works also operate within the realm of nostalgia, but rather than longing for a forever-lost childhood, I feel Soukup was using the reference to photographry to heighten the sense of the passing of time. This gulf of a different age is more prescient in the former Eastern Block, where the dividing line of 1989 marked Soukup's generation just as they came of age. In this way their childhoods are held forever in a kind of dirty amber, what some people refer to as "minuly život", the past life. 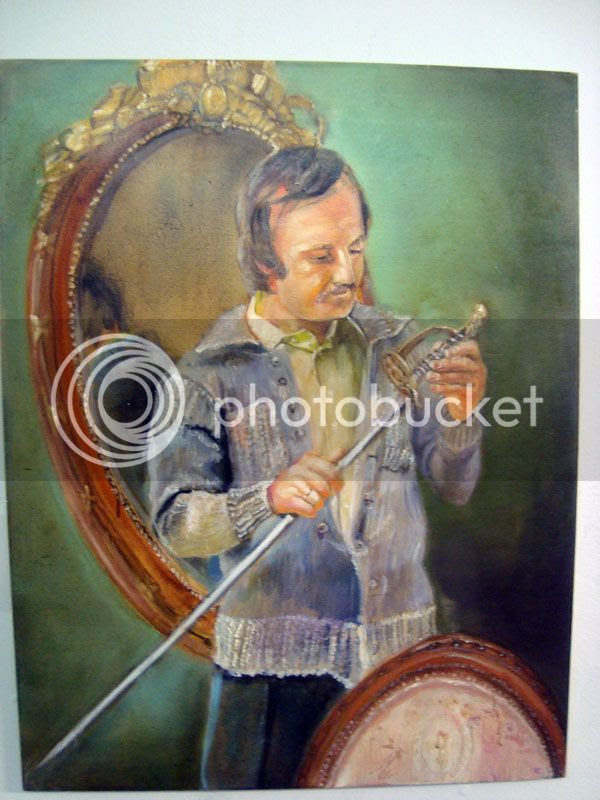 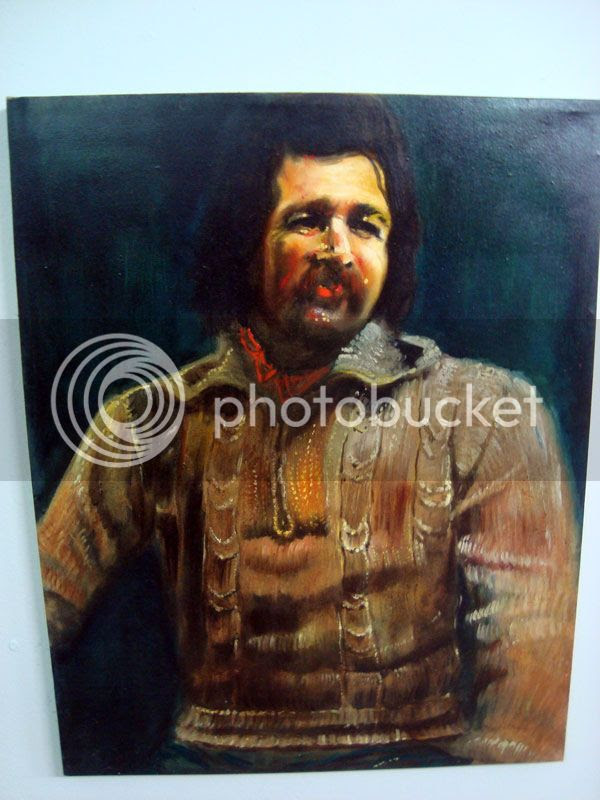 The works also represent a tragic masculinity, but one that deflates its own sense of self-worth. A masculinity that laughs at itself, overcoming tragedy through the comic, which is typically Czech. The power in Soukup's work stems from the way he channeled these specific cultural themes into something more universal. The tragedy surrounding his death is that of any suicide, and yet in this case one feels the loss of a great artist, the loss of the unmade, the cutting off of the flow of his work. Another tragedy surrounding the work is that it remains little known outside the circle of the Czech art scene. Lets hope that will begin to change. 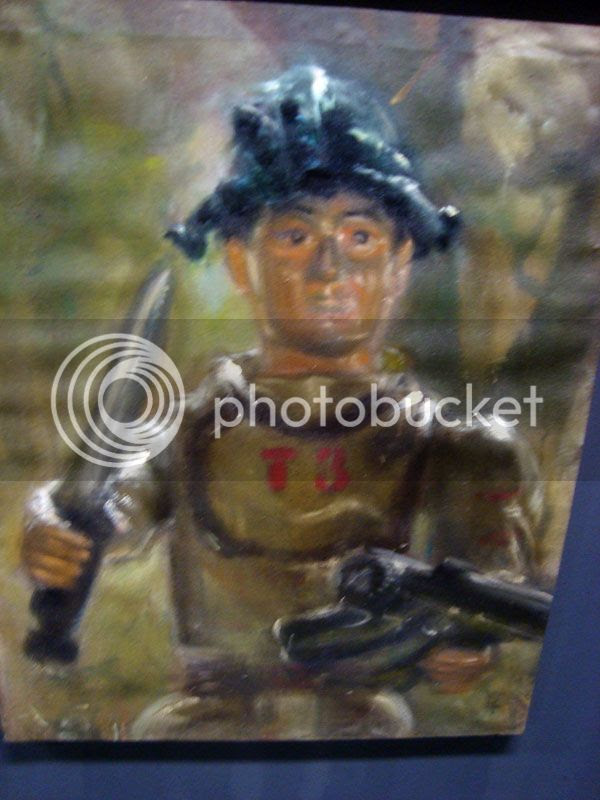 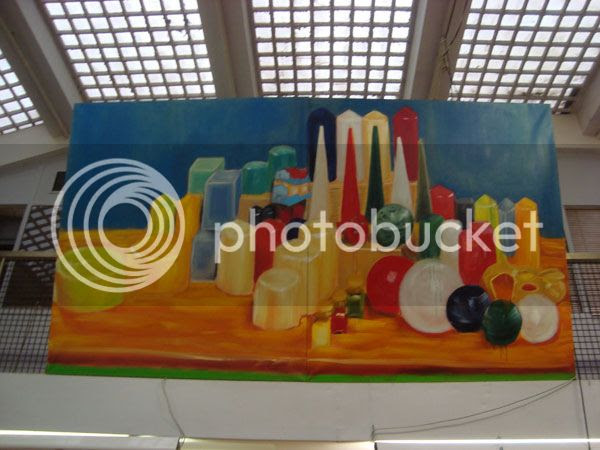 Posted by Lawrence Wells at 7:09 AM No comments:

We took a trip to Italy a few weeks ago and in Verona I bought a monograph on De Chirico. De Chirico is a peculiar case in that his early paintings were highly successful, but then in the 1920s he moved to Paris to join with the Surrealists. He quickly came to feel that Breton was overbearing and that many of the Surrealists were fakers and he went on his own highly iconoclastic way from then on, painting Neoclassical self-portraits dressed in historical costumes, or copies of various old master paintings. He was also known for making copies of his earlier work, like Dali would do as well. In some ways it appeared he had gone off the rails and lost his way. 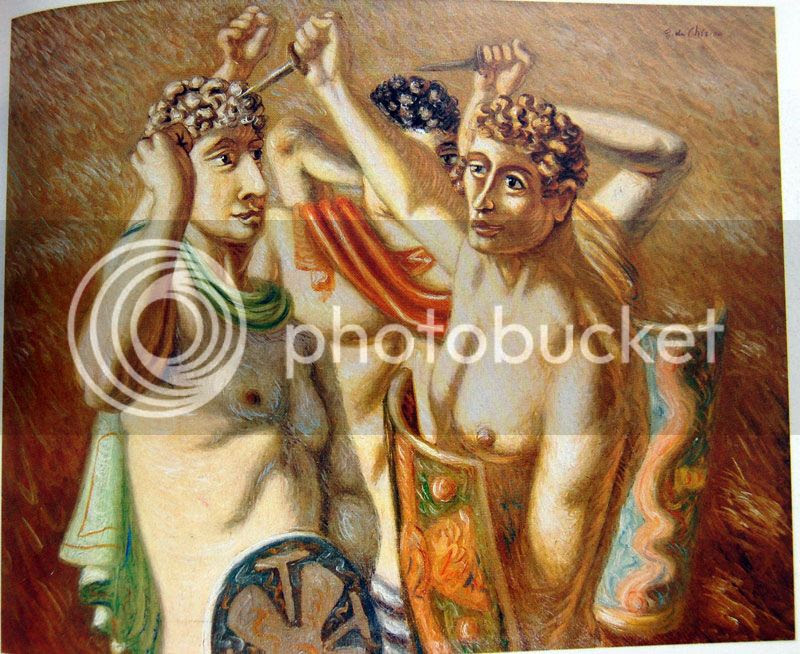 In the late-1920s De Chirico turned to the neo-classical and changed his style. He began a series of gladiator paintings, perhaps as a reaction to the rise of Mussolini, and also perhaps to Picasso as well. Italy was always central to De Chirico's work, the piles of accumulated junk and objects in his work symbolised the archaeological accretions of history in Italy. In a way De Chirico's use of static figures in his Metaphysical painting was a rejection of the cult of speed, power and technology in the proto-fascistic Futurists. And it has been argued that the elongated flacid interlinked bodies of his gladiators was again a kind of tongue-in-cheek response to the cult of masculinity so prevalent in Italian culture. 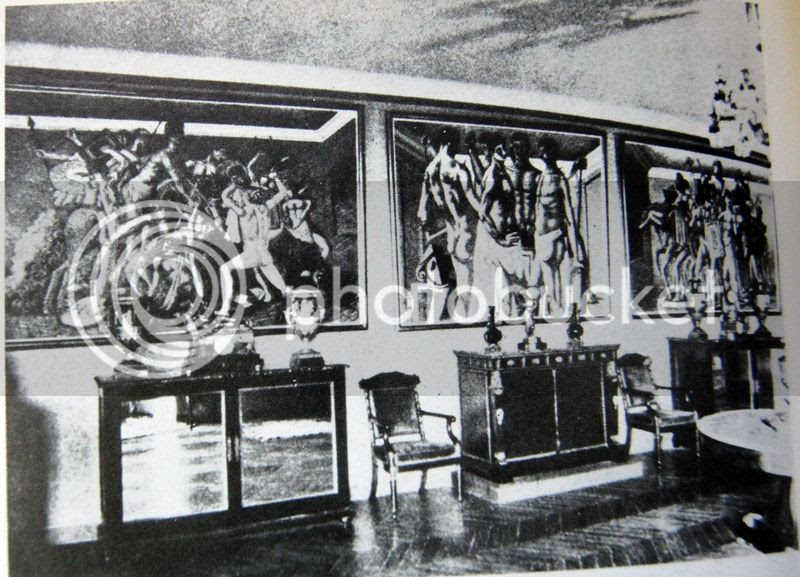 The gladiators were produced for the Casa Rosenberg, the Parisian apartment of the Rosenberg brothers, art dealers and connoisseurs, who supported Max Ernst, Francis Picabia, and many others, and commisioned series from these artists to fill their home I wonder what became of their collection and these gladiator paintings after the German occupation of Paris. Did the Rosenbergs escape to the USA? I'm not sure. There is a pdf online detailing letters between De Chirico and the Rosenbergs which focuses on art dealing and the looming economic crash of 1929. Dark days indeed .. the end of the interwar era. 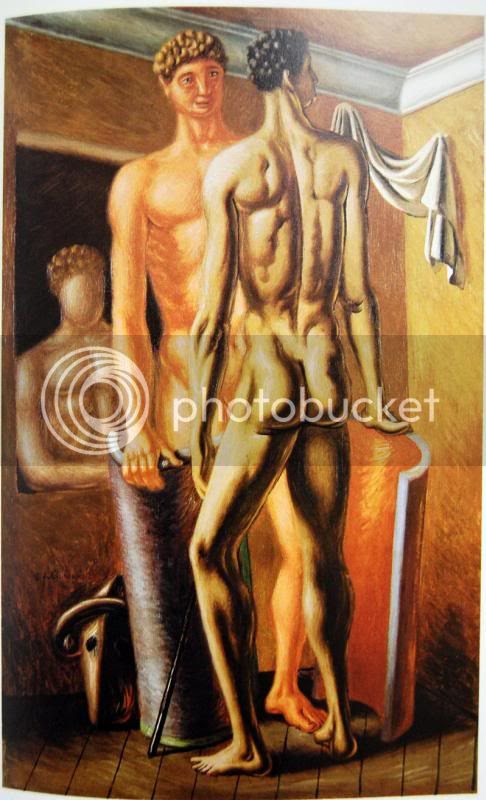 Its not a simple issue for artists to change their style. Chagall, for example, became burdened by his popular style and was forced to churn out his idyllic charming work for collectors. Still a pretty good job, but he was fearful to change his approach too radically. De Chirico'a figures are handled quite roughly, there's a purposeful naivete in the work, it looks very much like a precursor to Philip Guston's paintings from the '40s of school children doing battle on the street. The homosocial undertones are also quite risky for the artist. Anyone working this way today would be labelled as queer, or at least stereotyped. It seems the late 20s/early 30s was in many ways a high point in Modernist experimentation, culturally and socially, much like 1917-1925 had been in Russia. All this was swept aside by World War II. Now these paintings that survived are like relics of a distant age. De Chirico strikes me as an anti-modernist, in a way, in his penchant for Old Master painting and his dandified, aristocratic style, But he also faces into the future as an early post-modernist who was willing to take great risks in his work. The later De Chirico remains problematic because it is hard to classify, but in retropect that becomes a strength. A strength born out of tenderness, a strength that bends and is flexible, not rigid and unbending like a cannon. He represents an alternative Modernism, one that adapts and reflects on history and the mysteries of time and experience.

a New Yorker article here. Scroll back to page 67
Posted by Lawrence Wells at 2:03 PM No comments: